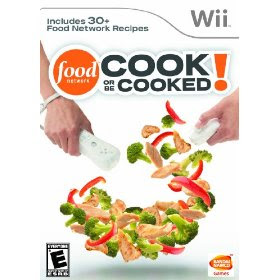 Last night rather than actually cooking, I ate Chinese take out and played Cook or be Cooked, a new game for the Wii where you virtually cook actual recipes. Now, as someone who cooks in real life an awful lot, I wouldn't say that pretending to cook was the most relaxing way to spend an evening but once we got the hang of it, it was fun. The game play is more realistic than it is in the Cooking Mama games (which I didn't really enjoy), you move the remote and nunchuck as you would an knife or other kitchen utensil and you have to do things like peel an onion before chopping it, rinse food off, preheat the oven, turn a skillet to coat in in oil, smash garlic with a bit of salt to make a paste etc. Everything happens in real time (although you can speed it up as needed, no reason to sit for 15 minutes while something bakes) and you have to multitask and make more than one recipe at once while making sure they are all done at the same time and served at the appropriate temperature. Making multiple dishes at one time kept the game play varied and engaging and we ended up playing a lot longer and making more recipes than we would have expected.

The recipes that you make in the game are actual recipes that you can make at home. I was impressed by some of the recipe's nice touches like adding peeled broccoli stems to your chicken and broccoli rather then throwing them out and making you cook them first because they take longer than the rest of the food. The "hosts" also give you cooking tips that have real world application rather than just virtual. I also liked how if you unlocked a recipe in single player mode (or vice versa) it would also be available to you in multiplayer mode. I thought it was great that multiplayer mode allowed you to pass a single remove with nunchuck back and forth (we only have one nunchuck)rather than requiring everyone playing to have a remote with a nunchuck. There is also a cook off mode (where I think you do need two nunchucks) where you compete to see who can complete a recipe the best. The recipe are included in the game booklet so you can make them in real life.

The only issues we had with the game were minor. I couldn't figure out how the game decided it was time to pass the remote to the next person. I think it must have to do with which recipe you choose to make in which order but occasionally the the game seemed very uneven in terms of what you were allowed to do before your turn was over. For example, I would preheat the oven for recipe A and rinse off strawberries for recipe B and my turn out be over. Then Matt would chop the berries, chop a banana, measure things and stir it all together, finishing recipe B, before his turn was over. Also, once I had a problem where I was supposed to turn on the oven to preheat. I didn't turn the knob all the way to the right temperature and then accidentally pointed the remote away. There was no way to go back, it moved me on to the next task and away from the stove. Luckily a task for a different recipe came up that required me to put a skillet on the stove and once at the stove I was able to turn on the oven for the first recipe. Additionally, while some of the feedback was helpful (leave lumps in the pancake batter for fluffy pancakes) negative feedback about adding pasta to boiling water a couple of seconds late or tilting the pan too slowly to spread the oil, neither of which negatively effected the recipe, seems unnecessary. I didn't particularly enjoy the the minigames where you had to say assemble burgers by clicking on a stream of patties, lettuce and cheese at the correct times instead of assembling them in a more realistic fashion. The games themselves weren't bad but they did seem out of place in a game that focused so much on realism. I also wish there were more recipes to make. While the box says there are more than 30 recipes, the recipes are bundled together (you make bacon, pancakes and fruit salad-3 recipes-all at once)  so you get through them rather quickly and once you make them well there is no compelling reason to revisit the same recipes again and again.

The game was a lot of fun: easy to play but still very realistic. I think it would be perfect for someone who wanted to pick up some cooking skills in a fun way or for families to play together. The issues I had were very minor and didn't affect game play.
Posted by Rachel at 9:39 AM

The LA public library website has vintage menus available for viewing. Very fun.
Posted by Rachel at 12:11 AM

I bought this spoon rest that is shaped like a pillow and it is great! Easy to clean and the spoons don't slip off. Our old spoon rest was bigger but ceramic and one day Matt dropped it or bumped it off the rack and because of the odd shape, it fell on an angle and it broke. Since they do need to be cleaned rather frequently, it made sense to get one that if dropped, wouldn't break. This one silicone and apparently, stain-resistant, I had cranberry sauce on it for hours and it wiped right off. Although it is smaller than our old spoon rest and doesn't have a sort of tray for the handle, it accommodates any spoon and the texture keeps them from sliding off.
Posted by Rachel at 8:58 AM

My entry into the NaMooSte Giveaway is my delicious herb potato salad. Oikos yogurt is a favorite of mine and works well in so many recipes. 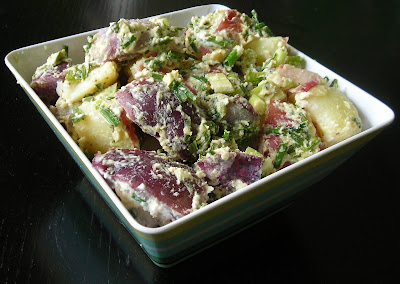 
Directions:
Bring a large pot of salted water to boil. Add potatoes and cook until fork tender. Drain and set aside. Meanwhile, gently stir together all of the dressing ingredients. Pour over slight warm potatoes and the celery and stir to evenly distribute. Serve chilled or at room temperature.


*I used the wonderful Oikos organic Greek yogurt. It is rich, creamy and fat free.


Leave a comment here and have a chance to win a spa/Oikos gift pack. 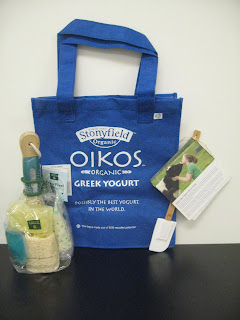 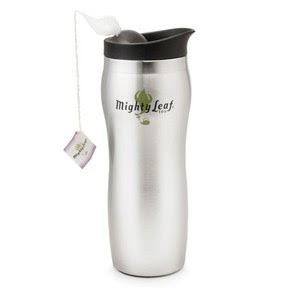 When I first lifted this travel mug out of the box I couldn't quite see what made it special. Then I looked carefully and realized that it is designed to allow you to pull the tea bag through a hole in the lid after the tea is done seeping, squeezing it and keeping it out of the tea you're drinking. No more too strong tea or having to wait for your tea to seep before you pour it into a mug to go. Added bonus: no having to find a place to dump your wet tea bag on the go.
Posted by Rachel at 1:03 PM