Well-Preserved: Recipes and Techniques for Putting Up Small Batches of Seasonal Foods 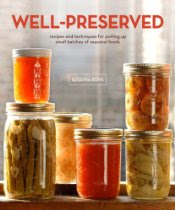 I have never canned but have accumulated quite a number of books about canning. Maybe this will be the year? This particular book is interesting because it is a combination of canning directions/recipes and recipes that use the items after they were canned. Now I just need to get some equipment and the nerve to can.
Posted by Rachel at 4:30 PM

If you are my friend on GoodReads, you will recognize this review, I am posting it here in case you missed it!

Let Me Eat Cake: A Celebration of Flour, Sugar, Butter, Eggs, Vanilla, Baking Powder, and a Pinch of Salt by Leslie F. Miller


I wanted to like this book more than I actually did. The concept was certainly compelling (a book celebrating cakes rather than simply being about making them) and it was edited by Betsy Lerner.

I think what put me off was how the author kept switching back and forth between personal memories (occasionally not cake related, she writes at length about her mother and grandmother's cooking), cake history, contests, cake shop visits and other cake related topics with little in the way of transitions. This gave a sort of scattered feel to the book. While these events were divided into different sections and chapters, she referred back to events that occurred in earlier chapters/sections fairly frequently so even though the topic changed, the chapters (she cutely calls them layers) really couldn't stand alone as individual essays. She also skipped around a bit chronologically, thoughts on her visit to Charm City Cakes are divided into at least 3 different chapters, which was odd and seemed out of order.

Some chapters (especially the more historically-focused) despite the obvious research that went into them seemed sort of thrown in at the last minute; they were very short and without much of the commentary the rest of the book was thick with. It was almost as if the book was both too large in scope-it is a celebration of cake, rather than a straight up memoir- and too small-she rarely ventures beyond the confines of the Baltimore area. Even the Today show competition she writes about is made up solely of local bakers. While Baltimore is home to several bakeries, it isn't as if Baltimore is some sort of cake capital in the country. When she does discuss cakes from other regions, one is not left with the impression that she actually traveled to these areas or tried most of those cakes.

Despite it being a book about eating cakes rather than making them, she does do a fair amount of cake baking in the book. I didn't get the impression she knew too much about baking before starting her book research and makes a few mistakes (repeatedly referring to vegetable shortening as lard springs to mind) which is fine, she doesn't claim to be an experienced baker, but these chapters take the book into more memoir territory which I felt was at odds with chapters about Marie Antoinette and the history of the cakewalk which were written with little personal interjection. The whole book sort of vacillated between being a personal story about a woman's relationship with cake and book that was more about cake in general and I ended up wishing that she had picked one form or the other. One's life can inform a more straightforward book about a topic and indeed that's what makes more readable nonfiction books stand out but she veered a little too close to the personal on too many occasions for a book that wasn't supposed to be a memoir for my taste.

I would have rather had a straight up memoir about her and her rather obsessive love of cake like Hilary Liftin's Candy and Me or more of a cohesive cake journey similar to Steve Almond's Candy Freak. All in all it wasn't bad exactly, I was just left feeling like something was missing.
Posted by Rachel at 4:45 PM

I complied over 70 of my favorite songs about food here. Do you have any to add?
Posted by Rachel at 4:00 PM

My New Favorite Cookbook: Jam It, Pickle It, Cure It: And Other Cooking Projects 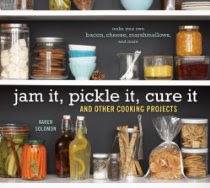 Jam It, Pickle It, Cure It: And Other Cooking Projects

is the type of book I wish I had written. It is sort of a cross between a DIY book and a traditional cookbook; full of recipes for homemade versions of pickles, marshmallows, jam and cured things like salmon that most people just buy at the store. The instructions are all very clear and the pictures are lovely.
Posted by Rachel at 3:31 PM